It’s not news that portion sizes have been expanding for the past 60 years, growing bigger and bigger with time. Nevertheless, the CDC recently released the following infographic in an effort to make Americans more aware of what an appropriate serving size is for commonly eaten foods. Check out their website for more information on portion sizes. 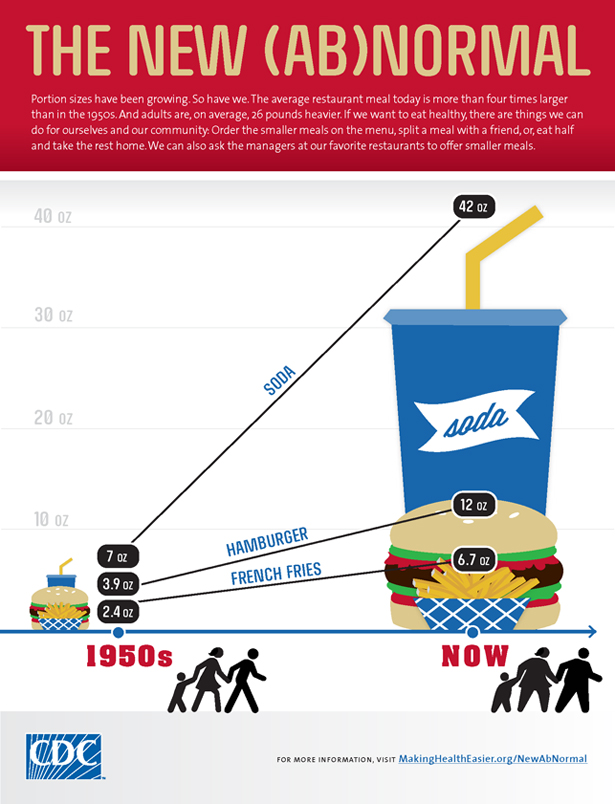 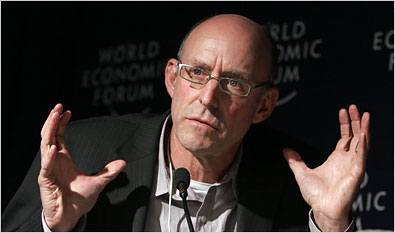 This fall at the University of California, Berkeley, a new course surveys the political, social, environmental, and gustatory stakes of modern food production. In his Edible Education 101: The Rise and Future of the Food Movement, Berkeley journalism professor and best-selling author Michael Pollan yields the spotlight to other experts: Though he appears frequently as introducer, moderator, and panelist, the classes are focused on an all-star cast of guest lecturers. Taken together, these food A-listers and innovators provide a compelling, comprehensive portrait of 21st-century eating.

Although all the lectures are available for free via UC Berkeley’s YouTube channel, The Atlantic has put them all together for you in one place. Check it out here.

*image via the New York Times 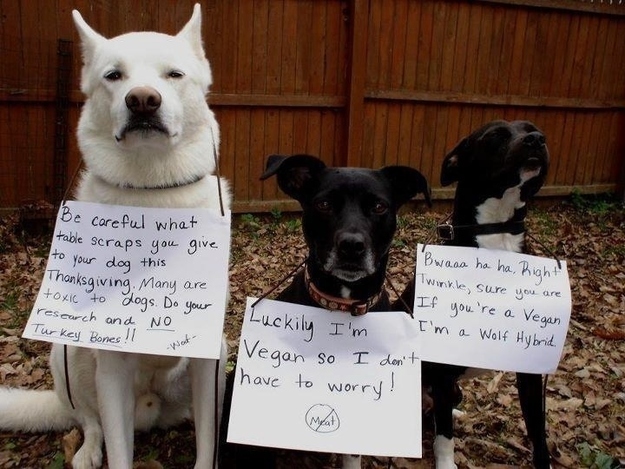 Made me chuckle, but also sends an important message – let your pets participate in Thanksgiving, but be mindful of what you feed them from the table!

It’s here: allergy season. Wait a minute, didn’t I just get over my spring allergies?! Yes, my allergies have become so awful and persistent that allergy “season” is a year-round affair for me. In trying to avoid feeling like crap daily, here are some tips that I hope help you get through the worst of allergy season:

First, take precautions outside and around your house to help you avoid or minimize your exposure to allergens:

Because it’s impossible to completely eliminate your exposure (unless you live in a bubble), drugs* and natural remedies can help too:

For more information, visit the American Academy of Allergy, Asthma, and Immunology’s website.

*Of course, you should consult your doctor or allergist before starting any new drug or natural remedies for allergy treatment. I’m not a doctor – these are just the methods that have helped me the most in overcoming my allergies!

The Ramen Noodle inventor, Momofuku Ando, died at age 96 last Friday. (Why was this not bigger news?) Ramen instant noodles were invented by Ando in 1958, and feed over 100 million people every day (NYT).

If you cook with Ramen frequently, as many college students do, I suggest getting 101 Things to Make with Ramen Noodles from Amazon.

Our dinner conversations are always interesting…

“In the Kingdom of Meats, olive loaf would be the court jester.”
-BW, after discussing the King and Queen cuts of prime rib

What people came up with these?!

The 6 of you who actually read this blog have probably been wondering, what the hell? Where IS that girl? Well, basically, I’ve been really lazy about posting. Mostly because I rarely read the newspaper at home (except for the comics- essentials, people!) and it’s been way too hot to cook or even grill. My work schedule has been hectic and in what free time I do have, I’ve been working on a scrapbooking project or hanging out with my best friend’s new puppy (adorable, by the way). But enough excuses, I actually do have stuff to write about!

1. The August issue of Gourmet arrived in the mail last week and the cover nearly made me drool- a delicious raspberry streusel tart! I’m so excited to try the recipe. I am a complete sucker for tarts, crisps, and pies made with fresh seasonal fruit. Raspberries and strawberries are my faaaaavorites! And they’re so easy- you just throw everything together and cook until golden brown and bubbling.
Also, the magazine came with a supplement of food-themed stories (essays, I guess?)- the editors seem to be experimenting with the format of the magazine a bit. The sort of stories that would go in Best Food Writing 2006 or something. I love reading about food almost as much as I like eating it, so the stories were interesting to me at least. I actually like Gourmet for the articles more than the recipes most of the time. (No subscription? You can find their recipes at epicurious.com.)

2. Have you heard about Russo’s Market in Watertown, MA? I hadn’t, but of course, I don’t live anywhere near there. It’s a gourmet market with fruits, veggies, fancy cheeses, etc. that supplies alot of the Boston area’s great restuarants. Looks like I’ll have to check it out!

3. I really wish I hadn’t told A. about this place called Soul Fire in Allston, MA. They serve up authentic southern BBQ with all the fixin’s, even fried mac n’ cheese balls. My arteries are clogging just thinking about it…But A’s all excited, so I’m just going to have to suck it up!

5. “Creamy, Healthier Ice Cream? What’s the Catch?”– It’s interesting what technology has done to the food industry…Crazy, no?

6. And speaking of ice cream, we went to Gibby’s last week (for dinner, haha), a lovely ice cream stand in Worcester that has been around forever (okay, 1928). Gibby’s is part of Gibson Brothers Dairy Farms (but the cows are not in Worcester) and they make their ice cream on the premises. We went last week on the first cool night we’ve had in weeks (it was still 75 degrees at 8pm though!) and there was hardly a line. I ordered Mint Chocolate Chip frozen yogurt, Mom had sugar-free Peanut Butter Paradise, and A. had Peanut Butter Cup (with chocolate sprinkles, of course). Now, their sizes are rather large. By ‘rather,’ I mean obscenely large. I ordered a kid size cup, and it was still 2 huge scoops- I couldn’t finish! A’s medium cone was about the size of his head (see above picture). But everything is delicious and they have a ton of flavors ranging from Watermelon sherbet (delish) to Cake Batter ice cream.

Alright, I’m out. We’re going to dinner at a new(ish) Vietnamese restuarant in town. Will it be as good as Da Lat? I hope so, I’m hungry!

Playing With Your Food

…taken to a whole new level!! The first one’s my favorite! He reminds me of some Disney character, but I don’t know which one…